New Years Day started out to be another beautiful winter day in Wisconsin with glistening snow and bright sunshine on our faces. Whistler had just finished cleaning the chicken coop, and since the girls were outside basking in the sunshine and taking dust baths in the sand, he decided to let them stay out for the day.

Let me take a step back! When I mentioned a chicken coop, know that our chickens have a southern facing picture window, and get fresh water daily (which is heated so it does not freeze.) There is a heater hanging from the ceiling (as not to start a fire) to keep their insulated coop just above freezing.  It is not healthy for them to get too much heat and moisture because it makes them prone to respiratory illness. Their coop is cleaned every few days so they always have a clean and dry environment. They also get organic pellets and tasty mealy worm treats every day. I would say they live a life of luxury in a condo and not a coop??

Eating bugs in the vineyard, fertilizing grapevines, and entertaining guests are their primary jobs.  And of course they give us a wonderful gift of fresh beautifully colored organic eggs.  They follow Whistler around the vineyard because they adore him.  The chickens are silky soft and each have their own personalities. When they get old and no longer lay eggs, they are allowed to live out their life just being a happy chicken.

During the summer months, we let them out of their condo each morning for the day so they can roam the vineyard and just be chickens. We close the door at sunset to keep them safe from night predators such as owls and raccoons. Since our vineyard is enclosed with deer fencing, the chickens are fairly safe from coyotes, foxes, and neighborhood dogs.

Fast forward to New Years Day. We walked to the coop in the late afternoon to close the door so the condo was secured for the night. A Sharp Shinned Hawk took off in flight after a leaving one of our beloved Plymouth Barred Rock Chickens half eaten. Inside the condo a mayhem unfolded before us.  Two of our favorite Buff Orpingtons lay motionless. And the rest of the girls had scattered wherever they could find cover. We have an “Easter Egger” (they lay green eggs) named Black Head.  She is from our original small flock we purchased in 2011 as we began our chicken adventure. Black Head has never been friendly to us. Now she was laying outside in the snow and allowed us to pick her up and bring her inside. There are no visible signs of trauma however we think she was pounced on and either has brain damage or internal injuries. We have been hand feeding her, and moving her in and out of her favorite nest box each day. We hope she recovers.

Some people would suggest we shoot the hawk, however hawks are a protected species. And we believe they have to eat too. Plus, if a hawk is removed, another will surely arrive to take over his territory.

For now, Whistler doubled the size of the “dog kennel run” that the chickens have, so they still can come out and play everyday, BUT they are protected by the mesh on top of the kennel (see photo) so the hawk can no longer attack them.  But they have been so traumatized they are afraid to come outside. We try coaxing them out with treats and assuring them it will be okay inside their new compound.

We are always very sad when a hawk kills one of our beloved chickens. The hardest part was losing the two who were killed but not eaten.  We also hope that Black Head survives this attack. We carry her where she needs to go, protect her from the cold, and feed her special food so she has the best chance to get stronger and back to her nasty old self.

We hope once summer arrives and there is more protection from the lush foliage of the grapevines, life in the vineyard will get back to normal!

Mother Nature can be CRUEL! 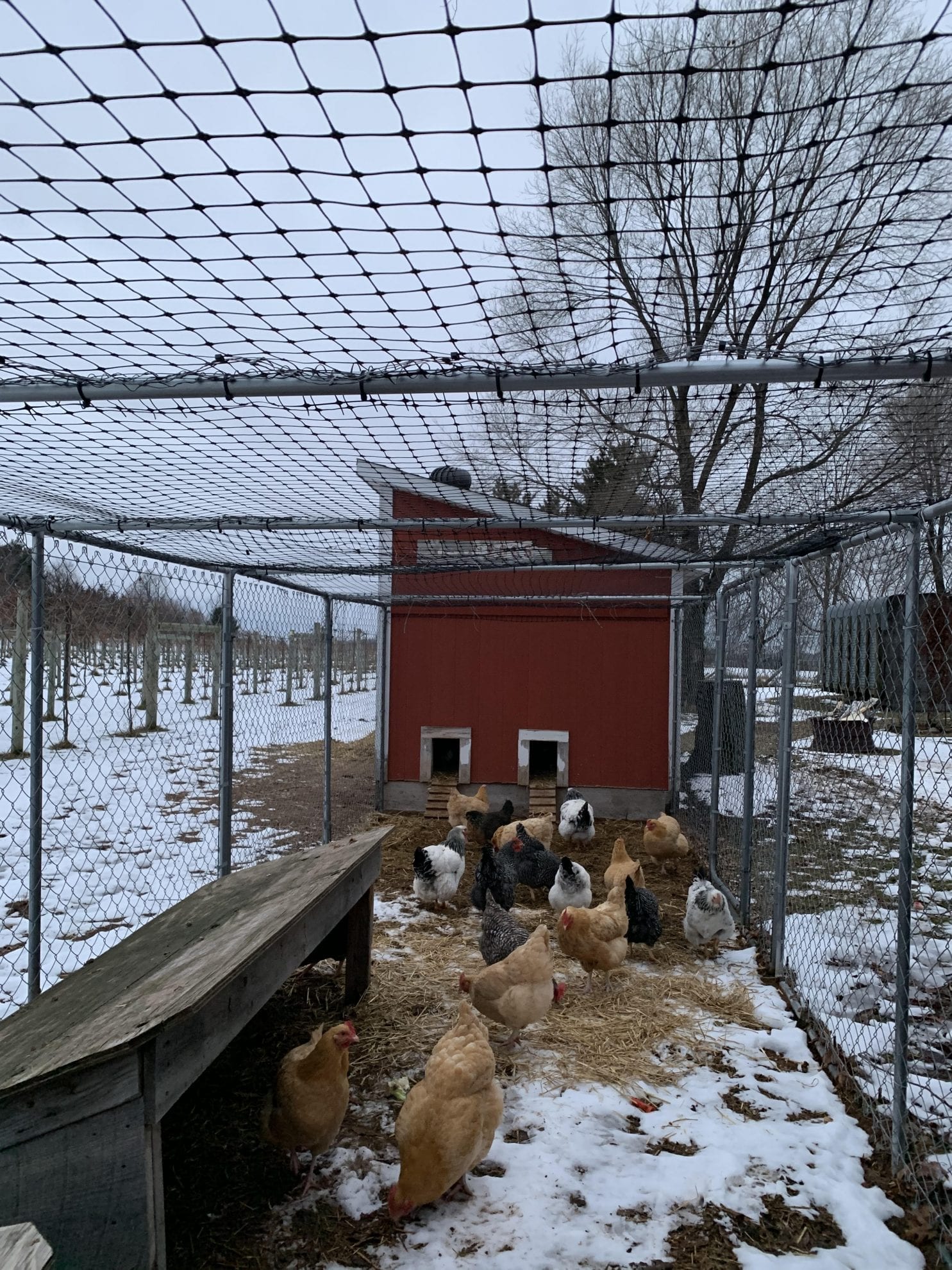